We use the best VR technology for traffic regulation simulations. We provide the real life experience from the comfort of your home, or from a training center. Practice any time, polish up your skills and get ready to use them on the road. Benefit of pre-produced scenarios, or create virtual traffic situations according to your needs.

Traffic regulation training is just one of many possible VR applications we can produce for you. Have an idea? Bring it to us! 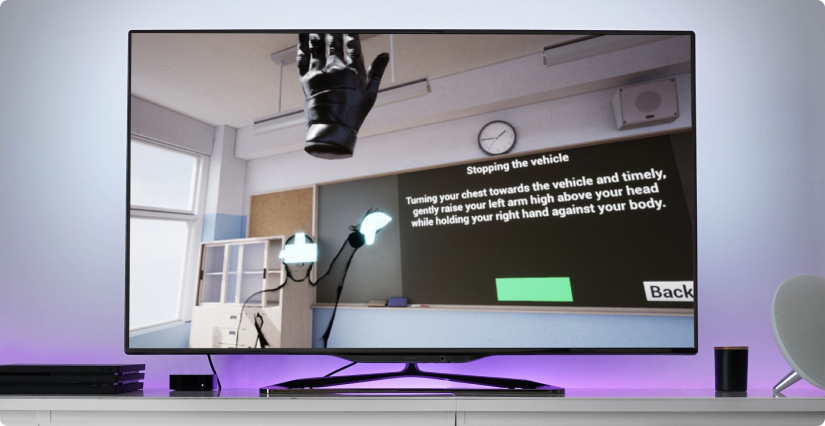 How we solved them

We solved our challenges by following the next steps: calibration, choosing the right technology, hardware, VR set and controllers, adding the error tolerance, and using the calibration variable logic blueprint. Starting off with calibration, the user is led through a series of “tests”, requiring him to repeat a set of moves and keep the position for a certain period of time. Data gained from those moves is then stored and used later on. After the right choice of technology used, hardware, VR set and controllers, we worked on the error tolerance. Error tolerance allows the user to successfully complete an action without being fully precise. Every movement is prone to user error, it’s up to us to decide whether we should allow it or not. Lastly, we end the process with the calibration variable logic blueprint. Algorithms, rules, and settings for the most realistic recognition of right and wrong movements of VR users and the reaction of NPC-characters to these movements.

Close Menu
We use cookies on our website to give you the most relevant experience by remembering your preferences and repeat visits. By clicking “Accept All”, you consent to the use of ALL the cookies. However, you may visit "Cookie Settings" to provide a controlled consent.
Cookie SettingsAccept All
Manage consent

This website uses cookies to improve your experience while you navigate through the website. Out of these, the cookies that are categorized as necessary are stored on your browser as they are essential for the working of basic functionalities of the website. We also use third-party cookies that help us analyze and understand how you use this website. These cookies will be stored in your browser only with your consent. You also have the option to opt-out of these cookies. But opting out of some of these cookies may affect your browsing experience.
Necessary Always Enabled
Necessary cookies are absolutely essential for the website to function properly. These cookies ensure basic functionalities and security features of the website, anonymously.
Functional
Functional cookies help to perform certain functionalities like sharing the content of the website on social media platforms, collect feedbacks, and other third-party features.
Performance
Performance cookies are used to understand and analyze the key performance indexes of the website which helps in delivering a better user experience for the visitors.
Analytics
Analytical cookies are used to understand how visitors interact with the website. These cookies help provide information on metrics the number of visitors, bounce rate, traffic source, etc.
Advertisement
Advertisement cookies are used to provide visitors with relevant ads and marketing campaigns. These cookies track visitors across websites and collect information to provide customized ads.
Others
Other uncategorized cookies are those that are being analyzed and have not been classified into a category as yet.
SAVE & ACCEPT